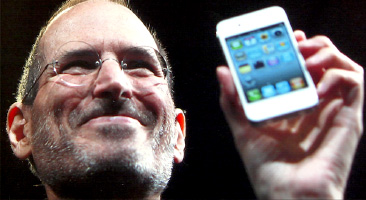 Children of Steve Jobs, a Japanese documentary program aired by NHK last week, had an unexpected content to me.

The program mainly focused on the students who attended the commencement at Stanford University and listened to Steve Jobs’ speech in 2005. While I thought the program woud be about how these students are proceeding with their dream after 6 years and how they are becoming successful today, I realized right after the introduction the focus of program was completely opposite.

It was a reality show of Stanford graduates who lost his job at Goldman Sachs because of financial crisis, who walks down the street with a “hire me” sign on him everyday, who went back to India in exchange for helping own country and family by giving up a promised position at Google, who started own business as a journalist after being fired.

I understand it’s arguable to call it that way, but the program was just about “No more American dream” and the content was devastating to me. We are seeing global crisis right now. America is facing nearly 9% unemployment rate, which roughly results in 1 out of 10 people having no job.

Silicon Vally is still the place for all tech entrepreneurs to offer lots of opportunities that no other places on the earth can’t compete. Stanford University is still the driving force behind Silicon Vally and people graduated from the university were thought to be all successful. However, this show reminds me of being successful from someone else’s perspective is not always equal to being successul in his/her own life value.

If working at Goldman Sachs and Google gives you a ‘dot’ which leads to your valuable connection in the future as Steve Jobs said during commencement, just go for it. If you are doing it just because everyone will think you are successful, please don’t. Life is too short to play that kind of worthless game.