The Japanese government finally announced its policy for AI talent education. To me, this is just another instant reaction without thinking too much that we’ve seen many times in the past.

In 1987, the government said we need to educate software engineers because there will be a shortage of 40,000 system engineers and programmers by 2000. In order to solve this problem, the government launched a plan to train 16,000 teachers who would be responsible for teaching programming at junior high school.

Did Japan become a top country in this domain? Nope. India, China, Vietnam, and the Philippines are doing a much better job right now.

In 2016, the government said we need to educate security experts who can prevent the country from getting cyber attacks because there will be a shortage of 200,000 security experts. Again, Israel and Chine are doing a much better job. Do you see the pattern here?

When the government says ‘educate’, it means they are trying to create more users, not inventors. Creating more AI users, particularly people who can use deep leaning, do not make Japan the leading country in AI. In fact, it’s forcing people to become consumers of AI, not producers. There is a huge gap between the two.

Look at Canada. Why does this country host so many scientists who contributed to fundamental research in AI? To name a few, Yoshua Bengio, Geoffrey Hinton, Yann LeCun, and Robert Tibshirani (a core contributor of LASSO which my startup uses it a lot), they are either born, lived, studied or worked in Canada.

If Japan were serious about being the leading country in AI, then all investments should be made toward creating more researchers in statistics, mathematics, machine learning, and AI fields. I strongly feel sorry for our children who are obligated to go through this ridiculous education policy driven by the government.

We must do something about it.

English Education in Japan Is So Wrong

I’m hugely concerned about the recent moves made by the Japanese government and its direction trying to introduce more textbooks into elementary school.

Now, there are new programming and English textbooks. The amount of pages in the entire textbooks is increased by 10% and the children in elementary school have to deal with them for the same amount of time as before.

This kind of bombing does not help English education in Japan get better. Please stop.

Japan has a reputation for bad English education. Japan is one of the very few countries in Asia where people from outside have serious difficulties communicating in English. It’s nothing but shame on us.

What we need is not a textbook nor proper grammar even. Why not adopt iPad and online English lessons? We need to get rid of our common sense that teachers must have a physical presence in the classroom.

The number of good English speaking teachers and the number of schools in Japan simply don’t match. There are too few GOOD teachers and too many audiences. We must adopt new technology rather than keep pouring old fashioned textbooks into the classroom.

I will be giving a talk at Doshisha Business School on April 13th. The topic is about the power of company culture and how to emotionally connect with employees.

This is a kind of topic where I’m spending my time a lot these days. If you are interested and happen to be in the city during that time, you can join our seminar by signing up yourself here. 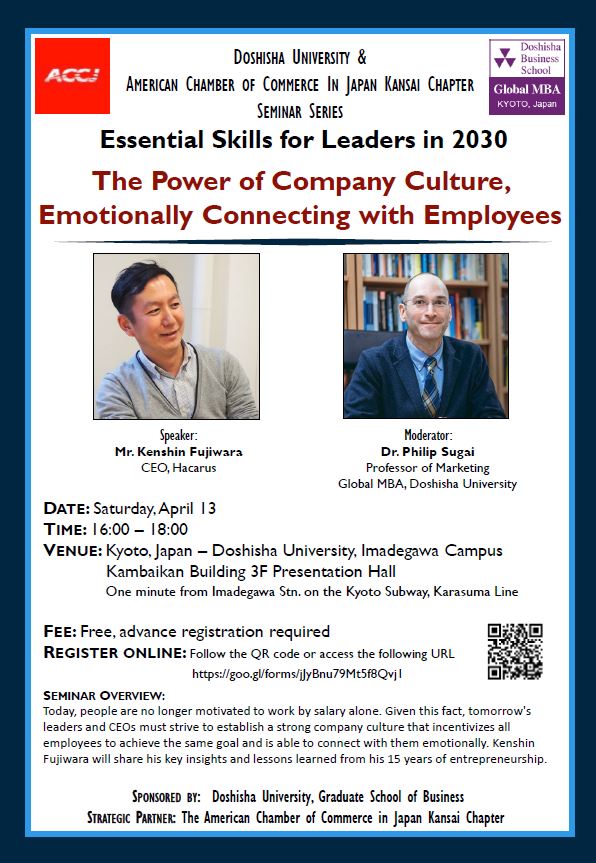 Although it’s not entirely required for startup entrepreneurs to learn how to program, I believe it’s a huge plus for them not only that they can more efficiently communicate with programmers and engineers but also that doing so could be the only choice to survive a crisis like CTO leaving. I really think this kind of movement is important and wish other cities follow the trend.